The host club must receive race entries, accompanied by entry fees, by the entry deadline as listed  on Race Announcement.
Please note:  These are maximum entry fee guidelines for races. Organizers can choose to charge less per start.  Maximum fees are set by the AK Dvision ACC.

Alaska Division alpine competition follows the USSA grouping system. Classification ages are based upon the age of the racer as of December 31 of the current season. Some restrictions apply to specific age groups. A description of the age grouping system can be found in the USSA competition guide.

The age classifications for the 2020-21 ski season are as follows:

Late entries may be accepted depending on the sponsoring club’s published policy.

An athlete’s divisional and national financial obligations must be paid prior to the athlete’s departure for any out-of-division or championship competition.

No one (competitor, coach, parent, legal guardian) may enter an athlete in a race in another division/region without prior approval from the Alaska Division office. The philosophy of the U.S. Ski & Snowboard is to discourage unnecessary out-of-division travel. The following policy will apply:

All host clubs will be responsible for sending out pertinent race information such as the schedule, field size limits, lift fees and area releases to all USSS Alpine clubs within Alaska, no less than 30 days prior to the scheduled event.  Each race organizer is required to email a Race Announcement to the AK Division office – admin@alaskaalpine.com.  Announcements should be sent out 30 days prior to the entry deadline.  Sample Race Announcments can be found in the U.S. Ski & Snowboard Master Packet of Forms.

The host club will issue racing bibs. The host club may charge a bib deposit at race registration or a fee for a lost bib or a bib returned late.

Host clubs of divisional qualifiers will generate overall results that include the age group and second run times for each racer. Overall results will be posted to the Alaska Division web site within 72 hours of the completion of that event or series.

Racers will be selected to attend these events according to the policy for out-of-division travel.   Selection is based on the National Team Selection Board (NTSB) using U.S. Ski and Snowboard seed points from the most current list on the selection date. The NTSB method is described in the U.S. Ski and Snowboard Alpine competition guide. Western Region automatics will not appear on the board. For Speed Series a modified NTSB board will be used, in that GS will always be the last pick on any line. Athletes must meet Alaska eligibility rules. Selection Boards will include only the events to be held at the Series, with the exception that Speed Events Series boards will also include GS. 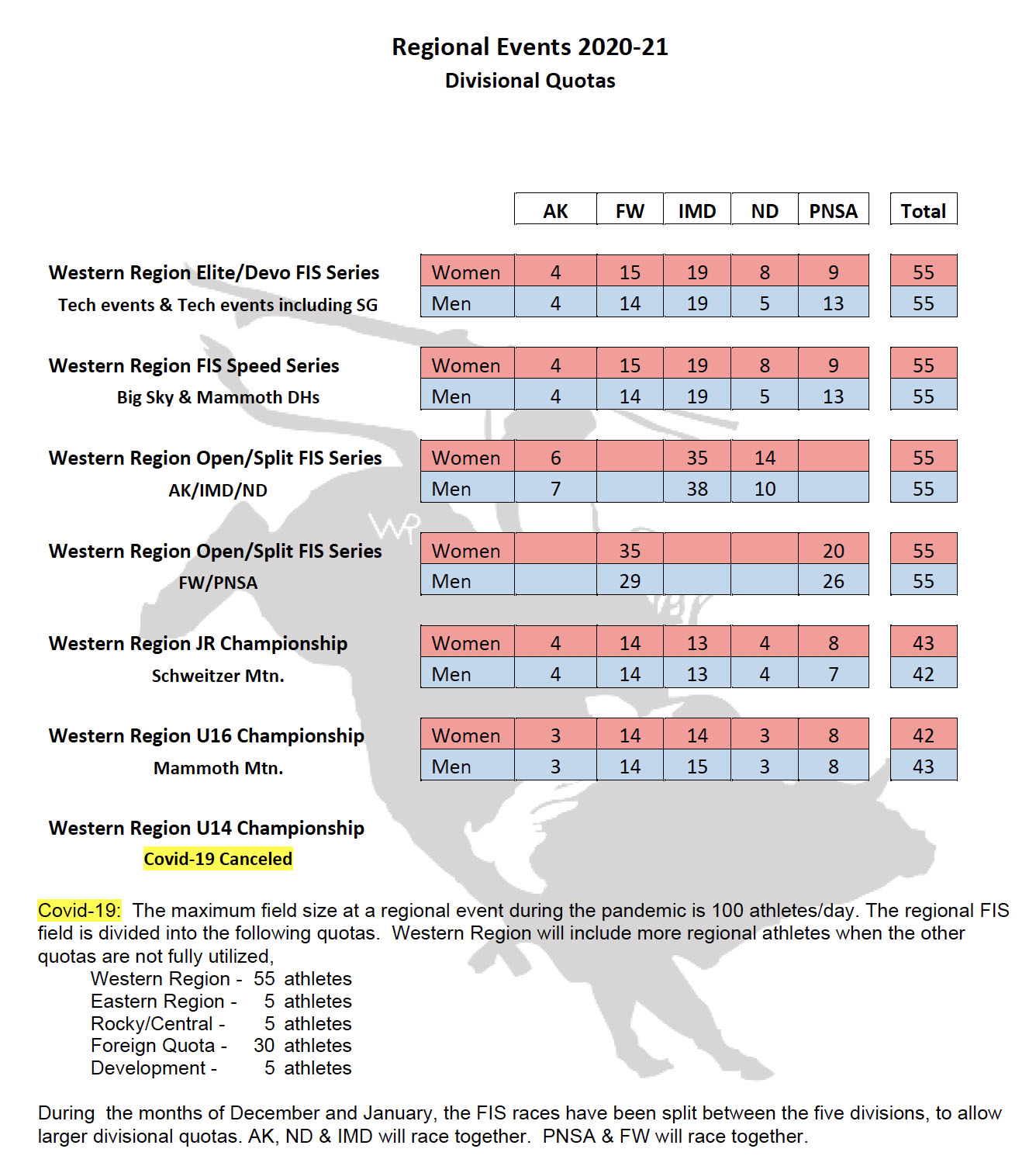 In the event that we are unable to hold two (2) Slalom or (2) Giant Slalom races in the qualifying series, only the single best finish in each discipline will be used for selections.

We will be using FIS List #14, and final selections will be announced after List #14 has been published.

The Alaska Division quota for the 2021 Western Region U16 Championships is 3 women and 3 men. The quota is determined by the Corrock Method which factors each Divisions’ population and team results at the regional championship from the prior year.

Any Alaska Division athlete who has been invited, accepted and participated in a Regional or National quota competition conflicting with Alaska Divisional qualifying races will be an automatic on a WR quotas.

Intermountain, Northern and Alaska Division share a championship for athletes who are not selected for the WR U16 or WR U14  Championship quotas for their division.   For 2021, this event will ONLY be for U16 athletes, per the COVID Policies set forth by US Ski and Snowboard.  Quotas are determined by population of participating divisions.  The 2021 Quotas have not yet been released from the hosting Division. [As of December 2, 2020]

The regional selection boards for U16 described above, will be used to determine quotas. Athletes may participate in their respective Regional Championship OR Tri-Divisionals.  Athletes may NOT attend both.

The winner of the first event in each discipline at the Alyeska Cup for the U16 and U19 age classifications, will be designated the Alaska state champion in that discipline. The first race of each discipline is used for the Alyeska Cup. WC points are awarded for each of three races (1SG, 1GS, 1SL), and only athletes that finish all three events will be eligible to win.

Up to 20 percent or 1 quota spot (whichever is greater) of any Alaska divisional quota may be allocated to discretionary selections. The use of this discretionary quota shall be the decision of the ACC. Petitions for exceptions must be made in writing, including supporting documentation, to the Coaches Working Group by the protest period of the final selection race. Approval of exception and inclusion into the quota shall be made by a majority vote of the ACC.

Governing Rules: The competition is conducted in accordance with current U.S. Ski and Snowboard competition rules and as modified by the following rules and host club modifications not in conflict with these rules.

Dates:
This event is held in March or early April.  Dates shall be determined at an ACC scheduled meeting in the fall prior to the event.

Rotation:  The event will rotate throughout the Alaska Division.  This rotation is voted on by the ACC.  Exceptions and changes can be made to the rotational schedule due to weather or other circumstances and any changes will be voted on by the ACC.

Events:
The Championship will consist of two runs of Giant Slalom and two runs of Slalom, (1 GS, 1 SL) and shall be U.S. Ski and Snowboard sanctioned non-scored events conducted on Saturday and Sunday.

Seeding:
Competitors shall be seeded separately by gender and class. In GS, U14 competitors will start before U12 competitors. Random draw will determine the first run start order. Second run is in reverse order. All competitors are allowed to start the second run, in their appropriate start order per run.

Field Size & Quotas: If competitor field size surpasses 150 total athletes in a given year than the ACC will set field size maximums and allocate regional club quotas in the following year.

Entry Procedure: Each regional club will send entries to the organizer no less than 7 days prior to the start of competition. Entry information will include: name, sex, year of birth, USSA registration number, and club affiliation. Entry form should indicate which competitors need housing (if offered by the club). Names of coaches should be included on the entry form.